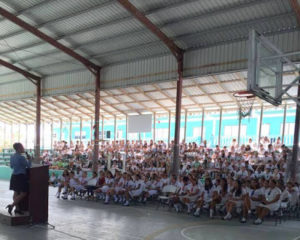 Last week I had the opportunity to give my testimony regarding sexual abuse to the 320 female students at San Pedro High School on Ambergris Caye here in Belize.

That was the largest audience I’ve ever told that story to. Afterwards there were those who came up and briefly shared their stories with me.

I knew there would be some who would identify…statistics say that 1 in every 4 girls has been abused.

No matter where we have been in the world there have always been girls and women who share my story. And that breaks my heart. 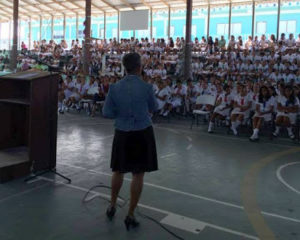 Here in Belize we’ve also come across young teens and preteens who’ve been exploited by older men. I had been told that this is also an issue out there on the beautiful island where the high school is located.

Thinking about abuse and exploitation reminded me of this passage:

Excerpt from Lolita,
by Vladimir Nabokov

She had never called me honey before.

“No,” she said, “it is quite out of the question.  I would sooner go back to Cue.  I mean-” She groped for words.  I supplied them mentally (“He broke my heart. You merely broke my life”).

Honestly, it took me years to decide to read this book. Other books by Nabokov are not so difficult to read. Knowing that this book is about a middle aged man and his relationship with a 12 year old girl turned my stomach. As an abuse survivor, I didn’t think I had the strength to make it through a book like this. I read it while we still lived in Russia. It was a difficult read. It broke my heart. It moved me to tears. It made me angry.

Vladimir Nabokov is quoted as saying:

Some people, and I am one of them, hate happy ends.
We feel cheated.  Harm is the norm.
This is so distressing to me.  Harm should never be the norm.
But, sometimes it is. Each week, here in Belize and all around the world, there are children and teens whose lives, hearts and spirits have been broken. Some of them are brought to their knees by their life circumstances. Others were abused or mistreated by someone who was supposed to care for them. These dear ones often struggle to conceive of a Power great enough to mend their lives, heal their hearts, replenish their spirits and redeem all of the suffering they have faced.
I wholeheartedly believe that healing can begin with a whispered prayer
that calls to The Light, the God of All Comfort, our Healer and Redeemer.
Join with me in prayer for those who are still victims.
And please, please, remember the Lolitas of the world.
Facebook Comments